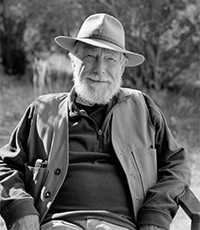 Gary Snyder was born in San Francisco. As a teenager, he wrote articles for the mountain-climbing club’s magazine and his high school newspaper, and then he went to Reed College, where he started reading Asian poetry. In the summers, he worked in logging camps, on trail crews, and as a fire lookout in the mountains. In 1955, he worked at Yosemite National Park on the trail crew. He said: “I had given up on poetry. … Then I got out there and started writing these poems about the rocks and blue jays. I looked at them. They didn’t look like any poems that I had ever written before. So I said, these must be my own poems.” They became his first book, Riprap (1959). That same year, he read with Allen Ginsberg at the famous October Sixth Gallery Reading where Ginsberg read “Howl” for the first time, and the two poets became lifelong friends. Snyder became a hero of the counterculture when Jack Kerouac published the book The Dharma Bums (1958), whose hero, Japhy Ryder, is based on Snyder.

For over a decade, Snyder spent most of his time studying Zen Buddhism in Japan. He has published more than 20 books of poetry and prose, including Axe Handles (1983), Mountains and Rivers Without End (1997), and Turtle Island (1974), which won the Pulitzer Prize in 1975. He has also translated poetry, taught English at the University of California, Davis, and is respected environmental activist and thinker. Snyder has lived in the same house since 1970. The house was built by hand on a 100-acre plot of land in California’s Sierra Nevada. His most recent books include Nobody Home: Writing, Buddhism, and Living in Places (2014) and This Present Moment: New Poems (2015).

Your most recent book is a lean volume of poems, called This Present Moment: New Poems. Can you tell us about that? Is it true that this will be the last book of poems that you publish?

This Present Moment may (or may not) be my last book of poems. I won’t worry about it either way. I do have some prose projects to finish, if possible. A new nonfiction prose book, The Great Clod, will be out in a few weeks. It’s about China and nature.

Can you describe your life in the Sierra foothills? Do you maintain a daily writing schedule?

I try to be present in every moment. Living off the grid and three miles from the paved road tends to focus one. I’m surrounded by forest and all its critters — and a certain portion of time is dedicated to being wildfire-safe, not just for my own little compound but for miles of wild land. I’m able to meditate awhile every day, listen in on ravens, squirrels, and woodpeckers, and take note when a generator or truck motor sounds funny. I have never lived in a house with television, so I still enjoy books. If there’s writing to be done, it’s first thing in the morning.

As a teenager, did you really wear lederhosen, moccasins, and a Robin Hood hat to high school, as is rumored? Because that sounds glorious. Was high school a good time for you? Were there any teachers who inspired you, challenged you, opened up new possibilities for you?

Where does this stuff come from? I never had any lederhosen until I was in my 30s and tested it out in the high Sierra. It’s too heavy. No Robin Hood hat but a good mountaineer’s hat for going out on the snowpeaks. I had several good teachers at Lincoln High in Portland, especially Mertis Towne who gave me tips in reading poems aloud, and Les Prillaman who taught American History.

Was there anyone who gave you a first big break? How did you get started in your career?

Hanging out with older men; GIs back from WW II was a great education. I got started writing poetry from reading poetry. Later learned a lot from Kenneth Rexroth, Philip Whalen, and Robert Duncan.

Sixty years ago, in the fall of 1955, you and Jack Kerouac made a trip to Yosemite’s Matterhorn. Do you have any especially vivid memories from that time? How did you first meet Kerouac?

Allen Ginsberg invited the recently arrived railroad brakeman Jack Kerouac to an evening soirée at Rexroth’s in SF. Jack read some of his recent writings. He asked me to take him into the Sierra and I did.

How would you say your environmental activism has influenced or informed your writing?

My writing and my environmental activism are not two. Walk the rocks and ridges, run the river, read the books and reports and papers.

Why do you write, and for whom?

I just do it. And for people who find it helpful to read something that takes a bit of time. My poetic language ranges widely from highly colloquial to esoteric and weird. Either way, I try to be clear.

Given the opportunity, what life advice would you today convey to a younger Snyder of 50 years ago?

Try to dress better. Be respectful toward elders. As Emerson is reputed to have said just before he died, “My only regret is that I behaved so well.”

Which poems never fail to awe or inspire or delight you?

Ah, this is a good question. They would in particular be William Butler Yeats and the Chinese poet Su Shih.