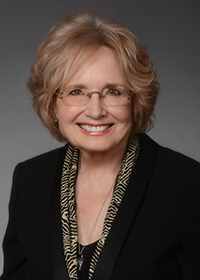 Jo McDougall has published seven books of poetry and a memoir. The University of Arkansas Press published her collected poems, In the Home of the Famous Dead, in 2015; her latest work, The Undiscovered Room (2016), came out earlier this year. She has received awards from the Academy of American Poets, the Arkansas Arts Council, and the Porter Prize Foundation of Arkansas as well as multiple fellowships from the MacDowell Colony. She has been inducted into the Arkansas Writers Hall of Fame. Co-director of the creative writing program at Pittsburgh State University, she lived for many years in the Midwest. A native of the Arkansas Delta, she now resides in Little Rock.

I grew up on a rice farm in the Delta, in southern Arkansas. My dad was a farmer, my mother a teacher in secondary education. I had solitude and open sky and freedom to roam the farm, to talk to myself, to tell stories. My mother read to me every night when I was young, from a now out-of-print set of 12 volumes, My Bookhouse. The townspeople of DeWitt, the small town where I attended school, fascinated me. I rode with my mother on her milk and egg route to the households of DeWitt, and with my father to the machinery dealers, bankers, and welders in the town. I soaked up their ways, their speech, their foibles. I came of age during and immediately after World War II; that also had a profound effect. I remember the gold stars in DeWitt’s windows that signaled a family member had died in service.

I did. I read everything I could find. On family vacations, when I was learning to read, I was proud that I could read the billboards flashing by. I read all the books in the house, especially the forbidden ones; magazines; the Nancy Drew mysteries; newspapers; labels on peanut butter jars — everything. I haunted the DeWitt public library.

When I was 11 or 12, I wrote a poem and gave it to my father, who framed it and put it with much ceremony on his desk. That was the beginning.

Where do the subjects of your poems come from? You have an ear for dialect.

I’m not sure where they come from. I think a sense of place plays an important role in my poems. People’s stories tend to stay with me, and I admit to occasional eavesdropping. Memory plays a huge part in supplying me with subjects. Memory surprises me with details that float into my consciousness. I have pencil and paper with me always so I can catch them.

Can you talk about your poem “This Morning” that was recently featured on The Writer’s Almanac?

One of my residencies at the MacDowell Colony in New Hampshire was in 2000, a year after my daughter had died of cancer at the age of 42. The morning the poem began in my mind, I had driven into the nearby town of Peterborough and noticed a man sweeping his steps, people walking, traffic moving without incident. The normalcy and ordinariness of it all was so much in contrast with the grief I was feeling that I knew I had to write it.

Your collected poems, In the Home of the Famous Dead, came out last year (2015). Can you speak about the book as a whole? These are 27 years’ worth of poems. Do you have a favorite poem in the collection or any with an interesting story or surprise inspiration behind them?

It’s a recent book; the latest is a volume of poems, The Undiscovered Room, published by Tavern Books Press in February 2016. I was honored when the University of Arkansas Press decided to publish the collected poems. I was also grateful that I had a contract with Tavern Books for a book to come out the next year; often it’s assumed that, with publication of a collected, the writer is either no longer writing or dead.

My favorite poems in the collected vary from time to time. For now they are “Harlot Hag Dry Harpy,” “For Stephen, Who Owns a Bag of My Cut Fingernails Carried in the Mouth of an Eel Who Swam the Caddo,” and “What We Need.” I wrote “Harlot Hag …” after a visitation by the spirits of a carnival barker and his girlfriend. They stood at the foot of my bed and asked me to tell their story. That had never happened to me before and has not since. “For Stephen …” came from reading hundreds of proverbs and fables collected for an archive of Arkansas folklore at the University of Arkansas. One piece of folklore in particular, a formula for curing fever, triggered my memory of a woman who used to help my mother, and the poem spun out from there. “What We Need” is the result of going to a sleazy circus in Pittsburg, Kansas, and, despite the cheap trappings, feeling the magic and the spell.

You learn a lot when all the poems you‘ve published to date are thrown together in a collection, jostling and talking with each other. You notice small things, such as how many times you used the same word in all the books. With me, it was dogs; there’s a dog in roughly every nine pages of In the Home of the Famous Dead.

It has changed only in degree. I still believe that poetry is a means of revealing and reviving the human spirit through story and the surprise of syntax, image, metaphor, words, and subject matter. I see now, more than ever, the need for that surprise. For me, it’s the most vital part of a poem. And more emphatically than before, I believe poetry should touch the emotions, should wound us, should make us laugh, should break our hearts.

The North American Review called you “the reigning virtuoso of the small lyric in English, able to capture deep human emotion and knowledge in very few words.” Do you spend a long time revising? Are compression and brevity important to you?

Compression and brevity are extremely important to me. I admire long poems, and I’ve tried writing longer poems, but they go bad and fall off the page, as my mentor Miller Williams used to say. I do spend a lot of time revising. Every word has to earn its place on the page, has to be necessary to the poem. What survives of the old ballads, for instance, are the lines and images that proved most important to the people passing them down. The fat was cut away, leaving the bones. I aim for the bones.

You also published a memoir, Daddy’s Money: A Memoir of Farm and Family, in 2011. Can you speak about that? Did you enjoy working in that genre? Did it feel like a natural leap to make as a poet who includes autobiographical details in many poems?

No, it didn’t feel natural. Although I admire the genre of nonfiction, and I enjoy writing it, my problem with the memoir was that the prose kept sounding too much like poetry to make the story and the tone believable. I had to keep flattening the language.

It was difficult, but it’s deeply satisfying to me that I wrote it. The memoir is about growing up on a rice farm in the Arkansas Delta. My paternal grandfather, who purchased the land in the early 1900s, was a pioneer in rice farming in Arkansas. I knew that was important history; I realized that many people, even in Arkansas, didn’t know rice was grown anywhere but in China. I knew I was the one to tell the story, to capture that time and place and land and lives of my parents and grandparents and forebears — a quirky, compelling cast of characters. Also, to my knowledge, no one had written about rice farming in America. I thought it important to put that piece of Americana on the page.

“The Circus Animals’ Desertion” by W.B. Yeats and “Early Occult Memory Systems of the Lower Midwest” by B.H. Fairchild. They both have mystery and a basic, primeval yearning and passion. “Early Occult Systems …” also taps deep into individual and collective memory and puts me in touch with wonder and awe.

What advice would you give to someone who wants to become a writer?

Read. Read all the time and read everything: all the Norton anthologies of literature, the Bible in the King James version, Shakespeare, contemporary poetry and fiction, your local newspaper, obituaries, the New York Times. Find a trusted mentor. Live for metaphor; be on the lookout constantly for the just-right comparisons that will surprise yet seem inevitable. Learn a foreign language. Eavesdrop. Be born and raised in Mississippi — there’s something in the water there that makes outstanding writers.