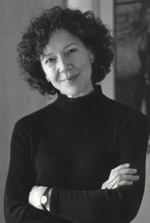 You were recently named poet laureate for the state of Minnesota. What does the post entail?

The poet laureate is an honorary position, and the essence of the position is to work with teachers and their students throughout the state to promote the reading and writing of poetry and to find other ways to promote and support poetry in Minnesota.

Do you have any plans yet for how you’re going to promote and support poetry?

One thing I’m learning is that just responding to requests is going to keep me very busy this year. I’ve had ones from libraries, senior citizens groups, high schools, grade schools, and local colleges, and I am hoping to initiate an “all-state poetry reading.”

Browse poems by Joyce Sutphen in The Writer’s Almanac Archive

My childhood was idyllic. Before I went to school, I spent most of my time outdoors, roaming the woods and fields surrounding my parents’ farm. I had a sister, who was a year and a half younger than me, and two brothers who were very close to us in age. In our family, we were known as “the big kids” (eventually there were nine of us). We played in the hay barn doing circus daredevil tricks; we built lodges and “cabins” in the woods, and we sculpted civilizations in the sand pile. On Sundays, we played softball with my father as the constant pitcher. My mother, who was always baking, canning, cooking, washing clothes, and caring for babies and toddlers, took time to draw and color with us on winter afternoons, but mostly we invented our own games and did as we pleased until we were old enough to help with chores.

In our family, everyone was expected to pitch in and help, so I spent long hours picking strawberries, hoeing potatoes, weeding the big vegetable garden, and—since I was the oldest—I got to do things that girls don’t always get to do: drive tractors, help with the milking, and tag along with my father when he went to the feed mill or the dairy.

Even though there was an endless supply of work, my parents always felt that anyone doing homework or practicing a musical instrument was granted dispensation from other things. So as you can imagine, we were all good students and loved playing music! I was a bookworm; I’m not sure how that happened, but my true pleasure was in books and libraries. I read everything—books I found in the attic, books that friends were reading in school (the ones that were popular then: Trixie Belden and the Black Stallion series, for example), and then—probably because I had the good fortune of being chosen to be in “Junior Great Books”—I started reading books by John Steinbeck, George Orwell, Aldous Huxley, and other serious writers.

How did you go from being a scholar of Renaissance drama to writing poetry?

They were both happening at the same time. When I was finishing my work on Shakespeare and the Art of Memory, I was writing poems, and as I continued writing poems, I was inspired by the Shakespearean sonnets that I was memorizing (and thinking about). I feel that I am more poet than scholar now, but I love both occupations; it’s just that teaching takes up most of my time during a large part of the year. Someday, I would like to write a scholarly book on the sonnets, but then I think of what Auden said: “There has been more nonsense written about Shakespeare’s Sonnets than about any other piece of literature extant,” and I hesitate. I like thinking about literary work (drama, poems, novels), but with the time I have, I like writing poems.

Do you feel your study of Shakespeare informs your own work?

Yes, but so does everything else that I know and love: driving Highway 169 back and forth each day, listening to Bob Dylan, memorizing poems by Emily Dickinson and Yeats, listening to the news, reading poems by my contemporaries, or watching a Little League baseball game. Shakespeare’s sonnets, however, do have a specific influence and importance for me, though I don’t think I manage to replicate—in my own work—what I most admire in the sonnets, which is their complexity of language (lots of puns and wordplay) and the way meter and rhyme work in such a natural and subtle way.

Who are your influences now?

That’s a hard question because I read even more poetry (especially contemporary) than I did when I began writing. Naturally, I read Minnesota poets (and there are so many wonderful ones that I hesitate to say names because I will probably omit one that I love and perhaps I haven’t discovered another one who will be a new favorite); I read contemporary American poets (W.S. Merwin, Maxine Kumin, Linda Pastan, and Ted Kooser are favorites, but again, I could name dozens of other American poets I admire); in the last dozen years, I have especially loved reading Irish poets (Seamus Heaney, Ciaran Carson, and Eavan Boland to name a few), Polish poets (Adam Zagajewski and Wislawa Szymborska), and contemporary London poets such as Anne-Marie Fyfe, Mimi Khalvati, Cahal Dallat and James Byrne. Lately, I’ve been reading Tomas Tranströmer (translated by Robert Bly) and Nazin Hikmet (Turkish). I memorize poems in the car on my commute to Gustavus [Adolphus College]—and just recently I have memorized poems by John Berryman, Yeats, and Keats, so I guess my influences are many and varied.

What’s your favorite writing exercise to give to your creative writing students?

I think my favorite is the most simple one I know. I like to read a poem to my students (one easy to take in by ear, one that I think is rich with possibility, one not too long but long enough for everyone to find a word or phrase or something that catches imagination) and I tell them to jot down something from or about the poem. After that, we write for ten minutes or so and see what happens.

This is something I learned when I was in a writers’ group years ago. We were all so busy and reading lots of papers for the comp classes we were teaching, so we didn’t want to have another place where we had to “prepare” before we met. We came upon the practice of bringing poems to read to each other (poems by writers other than us—Sharon Olds, William Stafford, whoever we happened to be reading—and then we would write for a while and stop to read what we came up with to the group. If at any time, one of us didn’t want to read, that was fine too—and we didn’t spend a lot of time critiquing each other’s “new” poems. Our goal was to draft new poems!

What are you working on now?

I am trying to get the poems of the last few years into a manuscript or two—while at the same time writing new poems. At the end of summer, I worked on new poems (sonnet-length) about the late ’60s, but now—since the semester is just getting into swing—I’m mostly working on the classes I am teaching. And new poems always come from what I’m reading and thinking there.

Joyce Sutphen grew up on a farm near St. Joseph, Minnesota, and currently lives in Chaska, Minnesota. She has degrees from the University of Minnesota, including a Master’s in English (emphasis in writing) and a Ph.D. in Renaissance Drama. She teaches literature and creative writing at Gustavus Adolphus College in St. Peter, Minnesota, and has also taught writing at the Split Rock Arts Program, at Northern Michigan University, and in London and Northern Ireland.

Her first book, Straight Out of View, won the Barnard New Women Poets Prize (Beacon Press, 1995, republished by Holy Cow! Press in 2001). Coming Back to the Body (Holy Cow! Press, 2000) was a finalist for a Minnesota Book Award, and Naming the Stars (Holy Cow! Press 2004) won a Minnesota Book Award in Poetry. In 2005, Red Dragonfly Press published Fourteen Sonnets in a letterpress edition, and in 2006 she co-edited To Sing Along the Way, an award-winning anthology of Minnesota Women Poets from the Territorial Days to the Present (New Rivers Press). Her fourth volume of poetry, First Words, was published in 2010 by Red Dragonfly Press.