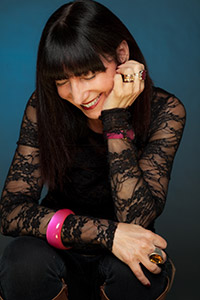 Kim Dower received a BFA in Creative Writing from Emerson College. Her first collection of poetry, Air Kissing on Mars (2010), was on the Poetry Foundation’s Contemporary Best-Sellers list. Slice of Moon (2013), her second collection, was nominated for a Pushcart. She lives in West Hollywood, California. Her newest collection, Last Train to the Missing Planet (2016), was published this year.

You grew up in New York City. Can you tell us about your childhood?

I grew up on the Upper West Side of Manhattan before it was fancy, across the street from the New Yorker Bookshop, Benny’s hot dog stand, and Murray the Sturgeon King! I’d roam the city on my own, ride my bike through Riverside Drive, hang out at the fountain in Central Park (went to the first “Be-In”!), took the bus downtown to Korvettes in the sixth grade to buy “Meet the Beatles” with my very own babysitting money. My parents had fun, noisy parties with friends who sang and played the piano. I’d run out of my bedroom for a quick hello then run back to my room, spend the evening dressing up in different costumes, force my array of dolls to listen to me recite Dr. Seuss and A.A. Milne. After school, the bad kids from the building and I would put bubble gum on all the elevator buttons, play handball against the Party Cake Bakery wall, make phony phone calls. I went to museums with my artist dad, long family trips in the old green Ford, had loving Russian grandparents with crazy, card-playing friends who spit when they talked, spent summers as a mother’s helper on the beach in Fire Island, went to Broadway shows on school nights. I was chased down 92nd Street by the tough girls from my junior high, was lulled to sleep by the music of the Broadway bus and police sirens screeching six stories below me. Years later when I was no longer living in New York, people would ask, “You grew up in the city? Right in the city?” — as if it were another planet. It was.

What led you to Emerson College? Did you have any particularly influential teachers there that would later inform your own teaching and writing?

Wanting to live in Boston led me to Emerson. I had no idea that I would stumble into the most incredible Creative Writing Department headed by the great Dr. James Randall. Emerson changed my life. Specifically, William Corbett who introduced me to William Carlos Williams, Frank O’Hara, and Raymond Chandler, and Thomas Lux, my first-ever poetry workshop teacher, who declared us all poets on day one, introduced us to the surrealism of Bill Knott and James Tate. His gift of inspiration and his passion for poetry have echoed throughout my life and continue to inform my work.

What made you decide to live in Los Angeles as an adult?

I had been to L.A. as a teenager, loved it, and always wanted to return. I craved warm weather. I longed for a change.

When did you first get the idea of being a writer?

I was always writing.

What was the first thing you wanted to write about?

I remember being in the third grade and writing a story called “The True Story of Flying Saucers,” about a God who lived in a house up in the sky — who, when he got angry, would take all the saucers out of the cabinet and toss them out his window, and all of us below would say, “Look at the flying saucers.” I remember that. I remember actually being proud of the “concept.”

You published an interesting article a few years ago called “Poetry as Fiction.” You said, “The fact is, we poets are not telling you our life stories — we want you to see your lives in our poems.” And, “Poets embellish, create, and lie, just like our fiction-writing brothers and sisters. We want to give you a good ride — just like they do!” Why do you think poetry is so connected to the idea of autobiography?

Maybe because poetry can feel so intimate we think it must be confessional! Readers forget the poet’s voice is often a persona, a character she has created. She’s not telling her own secrets she’s inventing someone else’s. What’s “real” are the emotions conveyed in the poem, not necessarily the situations, details, or events. And the feelings that those heartbreaking or hilarious moments in the poem stir in the reader are what connect the reader to the poet. The emotions become autobiographical for both.

Your latest collection, Last Train to the Missing Planet, was published this year. It is so much fun to read. Poet Richard Blanco said of the book: “These poems speak in the voice of an old, trusted friend who knows you, who has come to visit and remind you of who you are and what a life is all about.” What would you say your process is? Do you have a reader in mind? How do you invite the audience in? You establish such warmth and camaraderie in your poems.

Thank you! I love knowing that. A reviewer once called my poems “accessible and profound,” and I found that to be a great compliment. I don’t have a reader in mind. I try to offer moments and observations, the way I see them — often funny, sometimes sad — that people can relate to and be moved by. I have no “process,” except to write. The key for me is to be open to seeing and to get the idea down on paper the moment it hits me. If I wait, it will vanish. If I record it right away, it has the chance to grow into a poem. I keep pads and pens in my car, in my purse, wherever I am. When a poem strikes, I’m ready. Later, when I’m able, I’ll read my notes, see if they still move me, and I’ll transfer them onto my computer and mold them into a poem. During this “process,” the poem will live in a folder called “poems in play.” I have over one hundred living in there now. Sometimes the almost poem and never-will-be-poem will live there for months, years. Sometimes it will tug at me throughout the day until I pay attention to it.

Can you talk about your poem “Goodbye to James Garner,” which was recently featured on Almanac?

I often use newspaper headlines as prompts, and a couple of years ago when I read the headline “James Garner Dead,” in the Los Angeles Times, I was immediately moved to write a poem. And I remember devoting the whole day to this tribute. I was curious why I was so upset by Garner’s death — I had been a fan a long time ago — but at the moment of seeing the words “James Garner Dead,” I felt a rush of nostalgia, even excitement, and so many buried memories of those times started to flood me. There were several versions of this poem and I was surprised with where the poem led me. A favorite part of writing a poem for me is starting at one place and having no idea where I’m going to end up. That’s when the poem takes over and tells me what it’s about.

Many of your poems are funny. There is one called “Small Waists, Big Butts” in your latest collection, which begins: “The Style Section says small waists and big butts/are ‘in’ this year. This is good news for many women.” Is humor something you intentionally strive for in your poetry? Do you think poets sometimes take themselves too seriously and neglect the (often) silly minutiae of everyday life? Not all poems are tackling the big questions, so to speak.

I don’t intentionally strive for humor but often my poems just come out funny, and I’m grateful for that. I often see things as funny. Even sad things. And, yes, I do think we can sometimes take ourselves too seriously. It’s only poetry! I take the craft seriously. I’m serious about the words I choose and the way each line and stanza is constructed, but for me, the job of poetry is to record and examine the minutiae of everyday life, because that’s what a life is made of — moments, minutiae, and some may be silly. Often the poems that don’t appear to be “tackling the big questions” are in fact tackling them. “So much depends upon on a red wheel barrow.” A good poem, after all, is about one thing, and it’s also about “the other thing.” Often that “other thing” is the big question. “Small Waists, Big Butts” may be funny, but underneath the humor the poem is about the never-ending, pathetic fact that the world often judges women by their appearance, particularly the size of their butts.

You own a book publicity company called Kim-from-L.A. As a writer, what’s it like to be on the other side of the equation, the business side, as opposed to the creative?

My work as Kim-from-L.A. is very creative, which is why I love it, and I’ve found that each side of my life informs the other. Being a poet has made me a better editor of my own work, so I’ve developed a sharp editorial eye for my clients’ work, too. The press releases and pitches I write are as concise as possible! And the professional challenges I’ve faced by being on the “writing” side have definitely benefited my clients — how to get my work out there, how to handle events and connect with readers — all the things I’ve learned to do for myself have helped me do a better job for my clients. I have more compassion for writers and their plight, but I’m realistic. I know, firsthand, what publishing and promoting a book is really like.

What advice would you give to younger poets and fiction writers looking to get published?

Write. Write from your heart, write what you want to write, must write, and not what someone tells you “is selling these days.” That will change the next day, but what won’t change is what you care deeply enough about to spend your time writing. Develop your own authentic voice. Write every day, even for a few minutes. Go to writing workshops, festivals, conferences. Meet other writers. Go to readings at bookstores. Read. Know what’s out there. Know why your work is different. There’s no trick to getting published. Publishers look for work that moves them. Work they love. Just like readers. And there are endless opportunities these days to get poems published in journals and online. And so many writers are going the self-published route.

What is on your desk or outside your window right now?

Lemon trees, squirrels, and birds are outside my window. It’s early morning. An airplane just crossed the white sky.