Talking During the Commercials
The Writer’s Almanac for November 13, 2016

The Sound of a Tree Falling
The Writer’s Almanac for April 22, 2016

Why There Are No More Miracles
The Writer’s Almanac for January 4, 2016 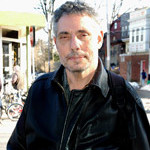 While working as a special education teacher in the New York public school system, Hal Sirowitz (b. 1949) made a name for himself in poetry slam competitions at the Nuyorican Poets Café. Then he turned his Jewish mother’s advice into a hilariously poignant collection of poems, Mother Said (1996), and it resonated with readers from around the world. Sirowitz has written 5 more volumes of poetry, including My Therapist Said (1998) and Father Said (2004).

He said, “Writing is a great experience. I get into this role and I just go with it…I get up early in the morning and I just start writing, and I have no idea of whether it’s good enough. I just go forward.”