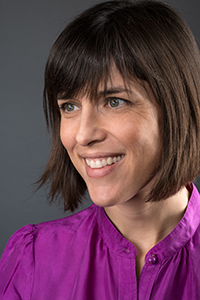 Born and raised in Mesilla, New Mexico, Carrie Fountain received her MFA as a fellow at the James A. Michener Center for Writers at the University of Texas at Austin. Currently writer-in-residence at St. Edward’s University, she lives in Austin with her husband, playwright Kirk Lynn, and their children. Her poems have appeared in American Poetry Review, Tin House, and Poetry, among others. Her debut collection, Burn Lake, was a National Poetry Series winner and was published in 2010 by Penguin. Her second collection, Instant Winner, was published by Penguin in 2014.

I grew up in the southern New Mexican village of Mesilla. My father ran the family business, a bar, and my mother worked in my grandmother’s Mexican restaurant for years, then went back to school and became a teacher. When she worked in the restaurant, she’d spend hours touching green chile — stuffing rellenos, making sauces — and I have memories of her sometimes herding us around with her elbows because she was afraid her hands would burn us. (And they would.) My father took over the bar from his father, who took it over from his father. Recently, my brother took it over. It’s now the oldest bar in the state of New Mexico, opened in 1934, within months of the repeal of prohibition. The restaurant is no longer, but it is still the place I’m most likely to find myself in dreams. The deadly deep fryers; the absurdly giant cylinders of cheese; the stacks of corn tortillas delivered to the back door; and the little array of pan dulce the baker left when he delivered the giant bags of bolillos.

My grandfather’s side of our family has been in southern New Mexico since before it became part of the United States in the Gadsden Purchase. My grandmother on my father’s side was born in Mexico and came to the U.S. to escape the Mexican Revolution. My mother is Scottish and German and was raised in New York City. She met my father in the Haight in San Francisco during his one year living away from Mesilla, in 1969. After my father was called home to take over the bar, my mother told him to come get her and marry her. So he drove his VW bug back to California and picked her up and drove her back to Mesilla. My mother had lived in Queens and San Francisco. Anyone who’s driven I-10 from, say, Tucson to Las Cruces, can imagine what a shock she was in for. Mesilla didn’t have paved roads until I was eight years old. We lived in an adobe house with a pot-bellied stove for heat. As a kid, I spent nearly every hour I wasn’t in school outside. We’d fish for crawdads in the ditches that brought water from the Rio Grande to the crops and orchards of Mesilla. We were wild, roamed free, came home at sundown covered in dust.

Southern New Mexico is a big, open place. The eye can go so far away from the body there. Looking far is a talent I cultivated as a child. It’s not very useful, but I did get very good at it.

I come from a people who are energetically oriented toward professional sports. At Christmas they exchange gifts emblazed with the symbols of their favorite teams while I look on and think Who are these people? Now I see that this helped me develop my writer’s mind. I spent a lot of time reading in my room while a football game roared down the hall. As a kid I loved books with voice and verve: the Ramona books, Charlotte’s Web, Harriet the Spy. I read Judy Blume novels so quickly I singed my eyeballs. Tiger Eyes, her novel set in New Mexico,gave me that wonderful reading-feeling: she’s written this book just for me. I reread Tiger Eyes recently. The amazing thing about it: hardly anything happens. It’s all inside. One thing happens, to start — a girl’s father is killed and the family goes to New Mexico. Otherwise, it’s all happening inside the character. She buys hiking boots. She goes down into a canyon and meets a boy. I don’t even think they kiss! But by the end everything has happened. Nothing is the same.

I was never drawn to fantasy or fairy tales. I read those books later, as an adult — Tolkien and C.S. Lewis and L’Engle — and I liked them, but I didn’t feel I’d been deprived in my childhood without them. I found fairy tales very boring as a child and still find them boring. Really, I’ve always liked this world — and the world inside, the interior life — and stories about people getting through, or not.

Childhood reading is magic. Huck and Jim on the raft. Scout in the courtroom. The images in my mind’s eye I created as a child reading those books are still inside me. I can call them up even now, as I sit using the free Wi-Fi at this coffee shop in Austin, Texas. That’s a miracle! I believe reading is one of the most special — and most crucial — pleasures of childhood. If I hadn’t read Judy Blume as a kid, I’d never have been able to love Tolstoy as an adult.

I have suspicions I wrote earlier than this, but when I was 15 a boy I was close with died in a terrible accident. It was such a tragedy, and such a shock to everyone. For whatever reason, I turned to writing in an attempt to grapple with that dawning knowledge of death, and the sister knowledge of life that accompanied it. What the hell is going on? This was the gist of my earliest attempts at poetry.

Where do the subjects of your poems come from?

I want to answer everywhere, but it’s more accurate to say anywhere. For a long time I woke very early to write, and in many of those poems there are dumpsters crashing to the ground, because there are dumpsters in the lot behind our house and the trucks come empty them at 5:00 a.m. and then throw them back to the ground. It’s really very simple. Poetry is taking the basics of perception — seeing and being receptive — and coaxing them into a practice. For me, this is as close to a spiritual practice as I have thus far been able to come. It is imperfect and sometimes painfully boring or unaccountably fallow or dangerously narcissistic, as I imagine anyone’s spiritual practice might be at any given time. But for me, it’s what Rilke said about “prayer and its time and its reverent and uncurtailed gestures”: these, he said, “are the condition of God and of his return to those who barely expect it and merely kneel down and stand up again and are suddenly filled to the brim.” Maybe someday I’ll look up from my writing and realize I’ve been praying the whole time. Maybe someday I’ll be filled to the brim. I’d like that. But until that time, I’ll just try to kneel.

Can you talk about your poem “Want,” which was recently featured on The Writer’s Almanac?

“Want” was part of my first collection, Burn Lake, but it was the poem that helped orient me to what I wanted to write toward next. It’s a poem about coming to terms with the imperfect nature of coming to terms. It’s not a poem about God, because I’m not good enough yet to write poems about God. But it’s a poem with God in it, which is better than nothing. And better than nothing is sometimes just enough — and sometimes it can be everything.

Oh, yes, I think so. It’s still changing and I hope it continues to change.

One of the things that’s difficult to discuss in poetry workshops or in light of criticism is the simple fact that some poems crack the world open for some people and not for others. And that’s okay! The longer you read poems and the more you allow yourself to open up to poems — allowing poems to do different things to you as a reader — the more you get from the experience. Poetry is a transaction. It’s a collaboration. Learning to read poetry is learning to receive. And what could be more important than that?

Of course, I was really lucky. I came to poetry in desperation, seeking, needing, searching. My approach has never been an academic one. I need poetry to live. And I hope that never changes.

What are the poems (by other poets) that you go back to again and again, ones that never fail to awe or inspire or delight you?

Oh, man. What a great question. The small poem “The Way It Is” by William Stafford broke my heart. And when I read it many years ago to my mother, she cried. Which is saying a lot. So many of his poems: “Ask Me,” “You Reading This, Be Ready,” “Traveling Through the Dark.”

Lucille Clifton’s “won’t you celebrate with me.” What a stunner.

I continue to be changed by the last lines of Keats’ “Ode on a Grecian Urn.”

And there are so many poems from of my contemporaries and teachers. Naomi Shihab Nye’s “Making a Fist.” Tony Hoagland’s “Barton Springs.” Dean Young’s “Where I Get My Ideas.” Laura Kasischke’s poem “Bike Ride With Older Boys.” Carl Dennis’s “The God Who Loves You.” Matthew Zapruder’s poem “April Snow,” which not only contains the line “I feel like a mountain of cell phone chargers,” but also takes place in the El Paso Airport.

I am devoted to the Brazilian poet Adélia Prado. Her poem “Guide” asks of God: “What is poetry, if not His face touched/by the brutality of things?”

As soon as I send this a million more poems will come to mind. This will continue to happen for weeks.